Did You Know?
•
Parks

As you may know, the Mouselets absolutely love Disney history! So, it made sense to combine our favorite things: history, and Hollywood Studios! We’ll take you through the founding of Hollywood Studios, opening day, and how the park has changed over the years!

After the opening of Epcot in 1982, Imagineers were still hard at work thinking of what pavilions could be added to Future World and the World Showcase. The original Future World pavilions all had different themes (read this article to find out more), and the Imagineers noticed one missing, entertainment!

Some say that Eisner, the CEO of Disney at the same time, was aware of the Universal plans. The same add that Eisner hoped a Disney park based on movies would cut Universal out of the Florida market before they could get a foot in.

In case Universal did follow through with these plans, Disney made it their goal to beat them with an opening date. They started advertising the headlining attraction for the new park: a multi-hour long tram tour through the backlot facilities of Disney’s newest studio and past staged demonstrations of special effects.

Where did MGM come into play? Disney Studios did not have a deep history in Hollywood. They were only 50 years old, and didn’t have any of the “Old Hollywood” films that celebrate classic Hollywood. So, Eisner went into negotiations with Metro Goldwyn Mayer, the largest and most glamorous movie studio in Hollywood. MGM had the movie history to create the dark ride (originally intended for Epcot). This is the ride we know today as the Great Movie Ride.

Finally, construction was done and Disney-MGM Studios opened on May 1st, 1989, a year before Universal Studios.

It was dedicated as: “the world you have entered was created by the Walt Disney Company & is dedicated to Hollywood – not a place on a map, but a state of mind that exists wherever people dream & wonder & imagine, a place where illusion & reality are fused by technological magic. We welcome you to a Hollywood that never was – and always will be.”

On Opening Day, the park had live soundstages being used. The new version of the Mickey Mouse Club for Disney Channel filmed in the theme park. The Florida animation studio also created the films Mulan, Lilo & Stitch, and Brother Bear in the park. This is why Mulan was the featured film in the old “Magic of Disney Animation” attraction.

Compared to Magic Kingdom and Epcot, this park was simplistic and a “half-day park”. The studios consisted of two parts: a backstage studio tour that included a two-hour guided tour by tram and an hour long walking portion, and a theme park area.

The walking portion of the tour included a chance to observe soundstages in use for television and movie production. The theme park area included shops, restaurants, shows, and five attractions. You’ll notice on opening day there is no Sunset Boulevard, Fantasmic, Star Tours, Muppet Vision 3-D, Streets of America, or Mickey Avenue (later renamed Pixar Place). The Star Tours building is on the map, but was not opened until the end of 1989.

The Backlot Tour was much different then the one we remember from several years ago. It started off taking you through the Costuming department, “where skilled designers create the clothes worn by your favorite stars.” This was similar to the newest version of the Backlot (closed now) where you saw seamstresses and tailors creating costumes. Attached to the costuming department was the scenic shop where craftsmen designed props and setpieces. Here, you got a peak at some old props used in movies.

Now comes the best part of the tour, The Backlot. Here, guests would see real sets used for filming movies and TV shows, and they even had the chance to see a movie being filmed. You started off touring a residential street, with built facades of houses.

Next you visited Catastrophe Canyon, where you got to experience first hand an artificial disaster. After, you headed over to the New York Street backlot, a set used to film busy street scenes. These streets used forced perspective two make the area look like an entire city. These are the Streets of America, which were not yet open to the public by foot.

Next up was the water effects tank, which later became the first part of the Backlot Tour. Several guests got to star in this movie about a disaster out at sea! You then headed over to the shooting stage where you got to see how mechanical effects of movies worked.

Finally, you ended up at the soundstages, which were designed to let you look onto movies and television shows in production. You got to see the editing and audio studios, and ended the tour at the Walt Disney Theater. Here, you got a sneak preview of new movies coming out soon.

Ever thought this gate looked out of place? We did! Until we learned it’s original purpose. This is where the Backlot Tour used to start. The gate was meant to represent leaving the public streets of Hollywood, and entering the movie studio (many studios have gates like this even today). The imagineers never changed the gate even after the theming of the area changed!

The opening day attractions in the Theme Park area were The Great Movie Ride, The Backstage Studio Tour, The Magic of Disney Animation Tour, Superstar Television and The Monster Sound Show. Streetmosphere came along in 1989, soon after park opening.

These attractions were all based around the theme of how movies were made. The Great Movie Ride took you through famous MGM movies and the animation tour showed guests how animation was created. Superstar Television was an interactive show experience. Guests were selected to participate in scenes from television shows including The Tonight Show, Golden Girls, Three Stooges, and I Love Lucy. They created these scenes by using green screens and created sets. This show took place in the SuperStar Television Theater, later renamed the Hyperion Theater (2014), where the Frozen Sing-Along takes place now.

The Monster Sound Show explored how sound effects were created for film and television. Several guests were chosen each show to create sounds for a horror-comedy short featuring Martin Short and Chevy Chase. A post-show expereince called Soundworks allowed for further experimentation with sounds (similar to Imageworks). This show was later replaced by Sounds Dangerous.

In 1989, Streetmosphere characters came to the park. These characters were meant to enhance the atmosphere of the Hollywood Streets, and act as though they were from 1947 and living in Hollywood. Each character had a unique personality, name, and story. Some were plays on real Hollywood actresses like Dorma Nesmond (based off of Norma Desmond from Sunset Boulevard). Some were police officers, movie directors, assistants, and aspiring actresses. They were later renamed to the Citizens of Hollywood. The Citizens are the only early day “attraction” left in the parks, and they are easily the best part of Hollywood Studios! To read more about them today, check out this article.

Courtesy of It’s a Disney World After All

In the 1990s, the park popularity and attendance grew. In 1994, the park saw its first expansion. Sunset Boulevard and the Tower of Terror were added. The Rock ‘n’ Rollercoaster wasn’t added until 1999. Indiana Jones, Muppet Vision 3D, Voyage of the Little Mermaid, and several other attractions all opened in the late 80s to early 90s during this expansion.

The backlot streets of New York and San Francisco were opened to guests, and renamed the Streets of America. This reduced some of the high foot traffic in the main parts of the park. The Honey I Shrunk the Kids Playground opened in 1990 in this area.

Courtesy of Happiest Blog on Earth

In the 90s, the Walt Disney Feature Animations on-site satellite studio assisted in the production of Beauty and the Beast, Aladdin, the Lion King, Mulan, and Lilo & Stitch. Beauty and the Beast Live on Stage opened on November 22, 1991, the same exact day the movie opened in theaters across the U.S.

Another stage show that started in the 90s was the Spirit of Pocohantas, lasting only two years, later replaced with the Hunchback of Notre Dame. This was located in the Premier Theater, in the Streets of America. Fun fact about the theater: the Frozen Sing-Along was actually located here for a year before moving to its current home!

The Soundstage Restaurant opened in 1998 and closed several years after. It was located where Disney Junior is found today. It also featured the Catwalk bar, an area that was left abandoned once the restaurant closed.

This restaurant was replaced with the Bear in the Big Blue House in ’99, and later came to feature Playhouse Disney and Disney Junior. This attraction closed permanently in August 2018.

Courtesy of Disney Day by Day

In 2001, the Sorcerer’s hat was built in front of the Chinese Theater and began serving as the park icon (replacing the role of the Earful Tower). 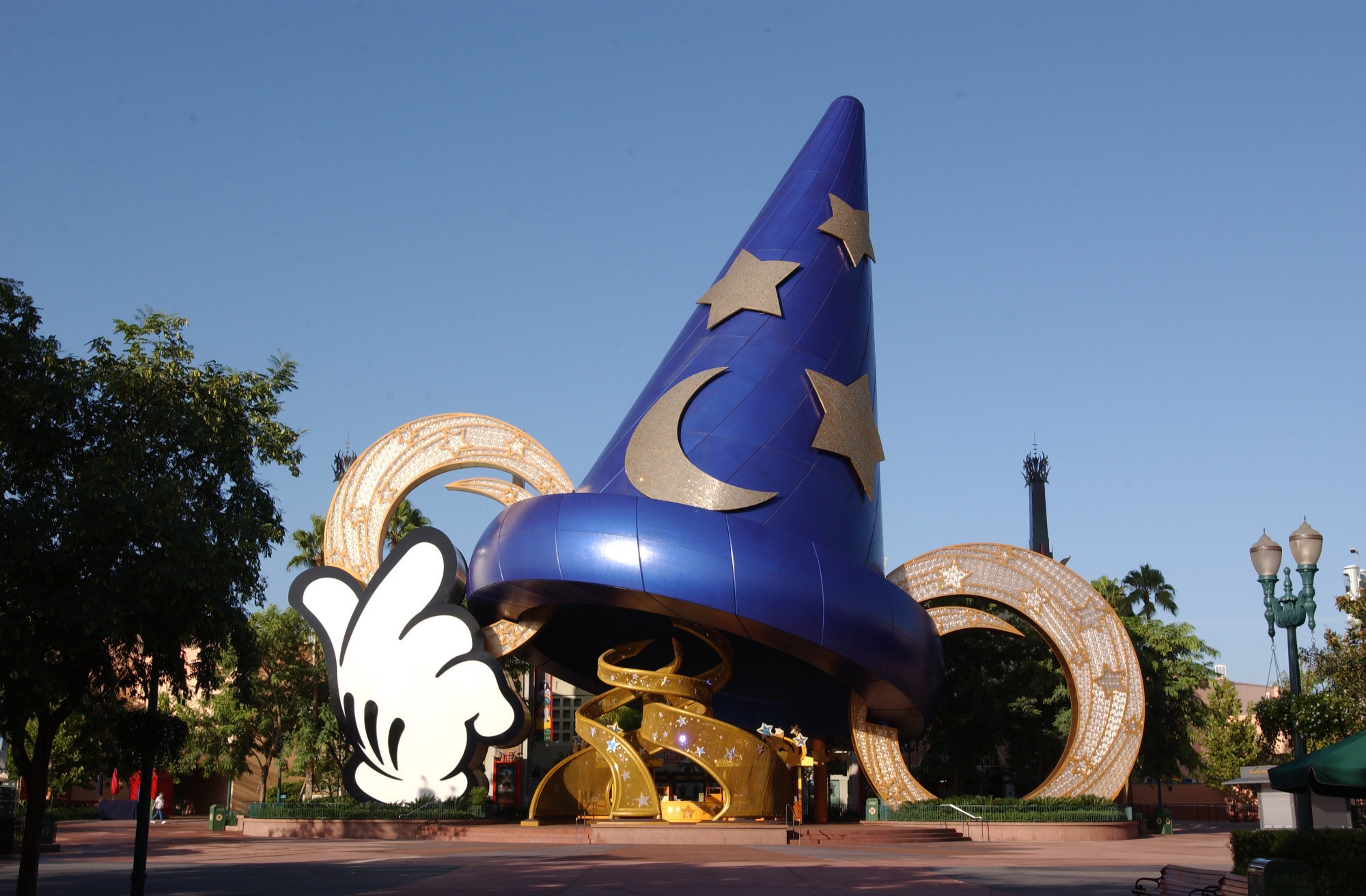 In 2004, Disney closed the Florida animation unit and the backlot Residential Street was demolished to accommodate thee Lights, Motors, Action! Extreme Stunt Show. This attraction was carried over from Disneyland Paris.

Who Wants to Be a Millionare, Play It! opened in 2001 and closed in 2006. It was located in the building that Toy Story Mania currently sits in. 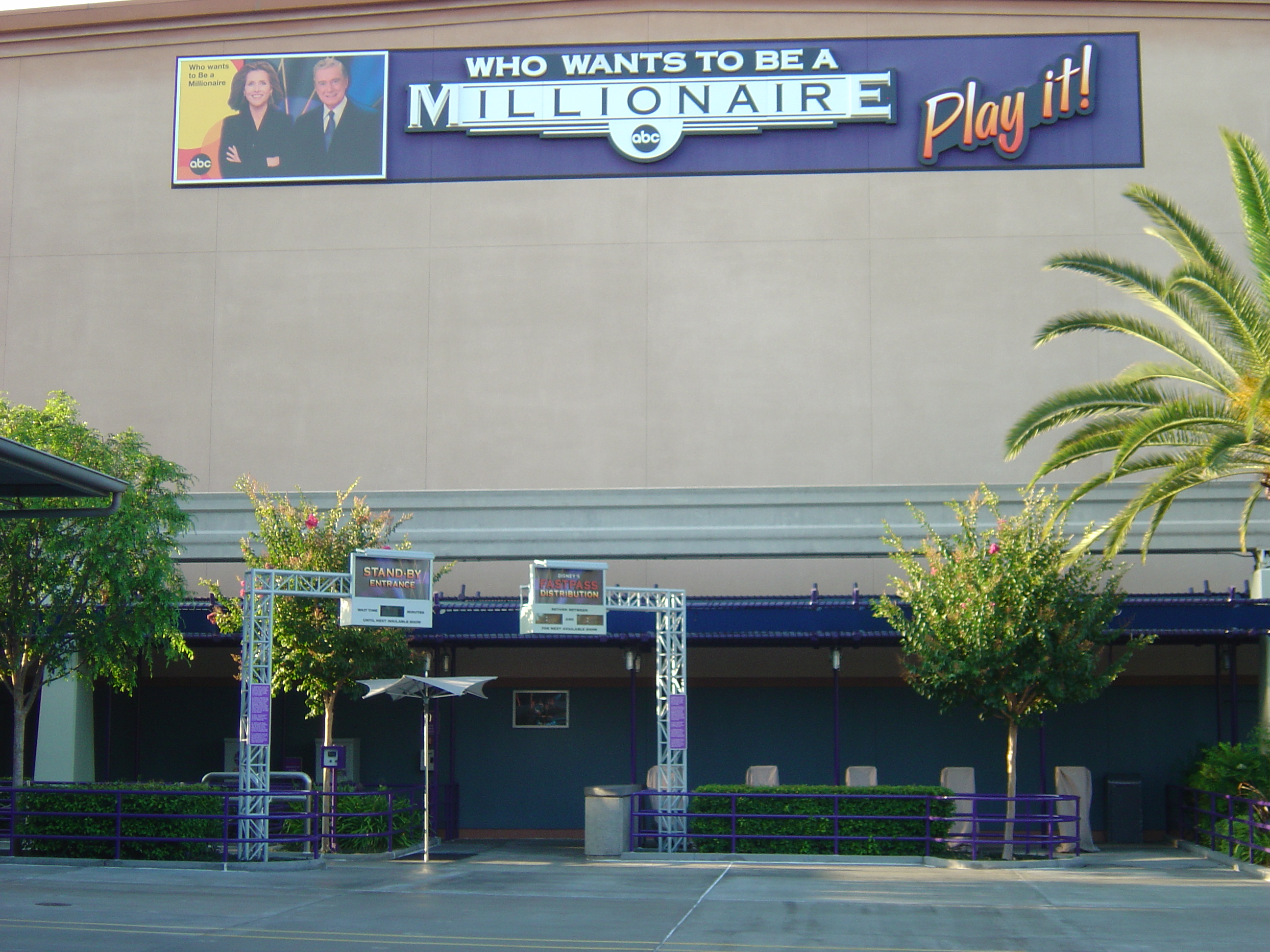 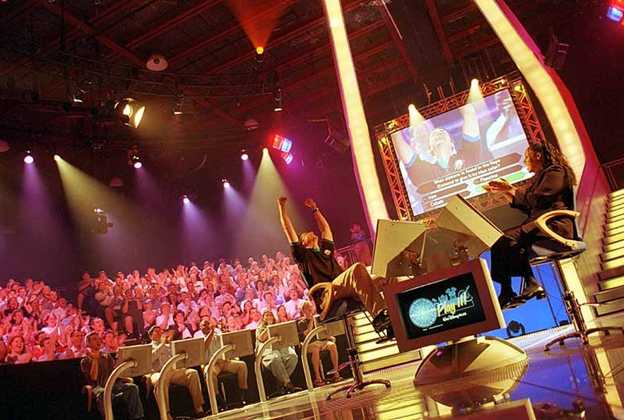 In 2007, Disney announced that Disney-MGM Studios would be rebranded as Disney’s Hollywood Studios, effective January 7, 2008. As Meg Crofton, president of Walt Disney World, put it in the press release announcing the change: “The new name reflects how the park has grown from representing the golden age of movies to a celebration of the new entertainment that today’s Hollywood has to offer–in music, television, movies and theater.”

That same year, the former Stage 1 soundstage that housed Who Wants to be a Millionare became home to Toy Story Mania, and the area was rethemed as Pixar Place.

In 2009, Sounds Dangerous closed and became a seasonal attraction until 2012, when it was replaced with the Jedi Academy. In the 2010s, Disney began phasing out the park’s non-immersive, “studio-like” attractions that headlined the park during its early years of operation. This included the closure of the Backlot Tour and the Great Movie Ride, to opening day attractions. American Idol Experience was closed as a result of the ending of the TV show.

In April 2016, the majority of the Streets of America including backlot street facades, the stunt show, and the Earffel Tower, as well as some closed off backstage areas, were demolished in preparation for Galaxy’s Edge and Toy Story Land.

In 2017, the final opening-day attraction was closed: The Great Movie Ride. It is to be replaced with Mickey & Minnie’s Runaway Railroad. Toy Story Land opened in 2018, and Galaxy’s Edge is set to open next year. The oldest attraction in the parks today is the Citizens of Hollywood, who truly embody the opening day statement: “the Hollywood that never was – and always will be“.

This guide to the history of  Hollywood Studios is not all-inclusive. There are many other attractions that have found their home in the park in the past and present, enough to fill a book. If you have anything to add, comment below! We hope you enjoyed reading about the history, and come to appreciate Hollywood Studios more!