Did You Know?
•
Walt Disney World

The idea for the Country Bear Jamboree came from Walt Disney’s plan to build a ski-resort in the 1960s. In addition to standard skiing activities, Disney wanted his ski resort to include entertainment for guests. One idea he came up with was a musical variety show put on by local bear wildlife. Walt Disney died later that year, and the ski resort plans were put on hold indefinitely. When Walt Disney World was created, the imagineers built the Country Bear Jamboree to fulfill Walt’s vision, and it was a huge success. The show is one of the longest running shows in the world, as it has run almost every day since park opening.

Dumbo the Flying Elephant was based off the Disneyland version which opened in 1955. The attraction is based off of the 1941 animated classic Dumbo. This ride was located in Fantasyland until Storybook Circus opened in 2014 and expanded to have two alternated rotating Dumbo rides.

The Frontierland Shootin’ Arcade is an attraction in Frontierland at Magic Kingdom. It simulates a shootout in Tombstone, Arizona, over Boot Hill in 1850. There are 97 targets in the shooting gallery. On opening day the guns shot lead pellets, but were later replaced with infrared light rifles due to the high costs of repainting the targets every night. This would have used 2,000 gallons of paint a year.

6. The Hall of Presidents

The Hall of Presidents was one of Walt Disney’s biggest successes. He dreamed up the idea of having audio-animatronic figures in the human form. The first he created was Abraham Lincoln which he presented at the New York World’s Fair in 1964. Disney originally wanted to create a street off of Main Street in Disneyland called Liberty Street at Edison Square. This never came to fruition, but when plans for Magic Kingdom were being made imagineers decided to make a Liberty Square Land rather than New Orleans Square. The Hall of Presidents idea fit perfectly into this land, and thus Walt’s vision came through.

Now called the Prince Charming Regal Carousel, the Cinderella Carousel was originally built by The Philadelphia Toboggan Company, a prestigious carousel maker, in 1917. Walt Disney purchased the handmade carousel and horses in 1967 from the Olympic Park in New Jersey. The original name of the carousel was Liberty, and the maidens can still be seen at the top. This ride has only had repairs and upkeep since opening day.

It’s a Small World was originally built and designed by Walt Disney for the 1964 New York World’s Fair. The original sponsor for the ride was the toy company Mattel, who sponsored the ride until 1998 when it sponsored Buzz Lightyear’s Space Ranger Spin. The company later dropped that sponsorship and ended its history as a WDW sponsor. It’s a Small World has had many interior and exterior refurbishments, with the most noticeable replacing and adding many new dolls.

The Walt Disney World Jungle Cruise is set as a depression era British outpost on the Amazon river, operated by the fictional company, The Jungle Navigation Co. Jungle Cruise is one of Walt Disney’s biggest success stories. Originally he wanted real wildlife to be on the sides of the cruise, but realized that would not be possible. The animatronics were some of the most advanced of their time.

Magic Kingdom’s original opening day version of the Mad Tea Party opened without a roof. Due to weather conditions including extreme rain, the roof was added in 1974. This also protected the central teapot and protected the ride. The teacups were updated in 1992 with a new color scheme, new music, and Japanese lanterns. In 2010 the canopy was repainted.

The Mickey Mouse Revue was an Audio-Animatronic music show featuring Mickey Mouse and other Disney characters. Mickey was the conductor of the orchestra, and orchestra members were represented by characters from several calssic Disney animated films. The show ran from 1971-1980, when it was relocated to Tokyo Disney.

The Mike Fink Keel Boats were small boats that navigated the Rivers of America, the body of water located between Liberty Square and Frontierland and Tom Sawyers Island. They were based on Walt Disney television shows about Davy Crockett. People could sit inside the boats or on top of them in a viewing area. In 2001 this seasonal attraction closed for good. The old loading dock still exists today and the queue entrance was used as a Fast Pass distribution area for some time.

A beloved attraction to many, Mr. Toad’s Wild Ride was located in Fantasyland until 1998 when it was replaced by The Many Adventures of Winnie the Pooh. Many protested this closure but were unsuccessful in saving the ride. A statue of Mr. Toad can be found in the pet cemetery outside of The Haunted Mansion, and paintings of the characters can be found in a portion of the Pooh ride. This ride is still open in Disneyland California for those who want to ride it again! 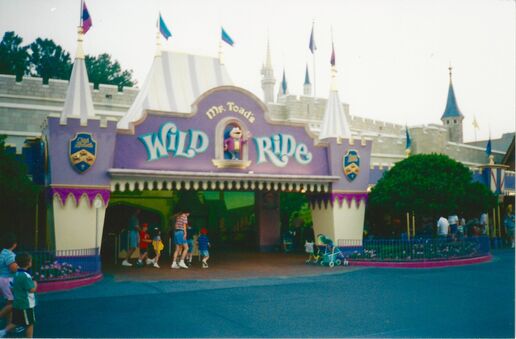 The Skyway was a gondola lift attraction located in Tomorrowland and Fantasyland of Magic Kingdom. The Skyway was open from 1971-1999, before closing permanently. The Tomorrowland Station was partially demolished in 2009 during the refurbishment of Space Mountain, however its lower station remains as a restroom facility. The Fantasyland Station was used for stroller parking until 2011 when the Tangled Rest Area was built. The Skyway was closed due to metal fatigue and its inability to serve many guests at once. The “Disney Skyliner” is now open at Walt Disney World and connects several resorts, Hollywood Studios, and the International Gateway at Epcot.

Snow White’s Adventures opened in 1971 as a much different ride then you may remember it. The witches were very realistic, and much of the ride took place in dungeons and the forest. The ride ended with a room with flashing strobe lights and the witch’s cackle skipping like a record, implying that she had killed you. In 1994 the attraction was redesigned to follow the movie better and be more kid friendly. The ride closed in 2012 and was replaced by Princess Fairytale Hall.

The Swiss Family Treehouse opened in Adventureland with the opening of Magic Kingdom. The tree is intended to look real but is made of steel, concrete, and stucco and is 60 feet tall and 90 feet wide. The attraction is based off of the movie “Swiss Family Robinson” and is a walk-through attraction.

This attraction is better known as Walt Disney’s Enchanted Tiki Room. The Disneyland version was the first to feature Audio-Animatronics. The attraction at WDW featured the same premises of singing birds, but included a story of two toucans. In the 1990s, with plummeting attendance of the attraction the attraction was completely overhauled to become the Enchanted Tiki Room: Under New Management hosted by Iago and Zazu. This version still remains in Magic Kingdom.

The Grand Prix Raceway was based on an international car race. Its sponsor was Goodyear, as it supplied the tires on the Mark VII vehicles. The ride was expanded in 1973 and was not changed until the 1994 remodel of Tomorrowland. In 1997 the theme and name were changed to Tomorrowland Indy Speedway to fit the New Tomorrowland theme. 15 years later, in 1999, Disney partnered with the Indianapolis Motor Speedway to change the theme of the track to that of a famous speedway. In 2008 the name was changed to Tomorrowland Speedway, dropping the Indy portion.

Recently, in 2017, rumors circulated that this ride would be replaced by the TRON coaster, however this ride will be built in a long-vacant plot of land that had been reserved for a clone of the Matterhorn Bobsleds when the park was originally constructed.

The WDWRR opened in 1971. It is one of the busiest steam-powered railroads and transports over 3.7 million passengers a year. The railroad stops at Main Street U.S.A.and Frontierland, and used to stop at Toontown Fair which closed in the 2000s. The station reopened as the Fantasyland Station in Storybook Circus. Each train is named after those who greatly contributed efforts to the creation of WDW including Walt Disney, Lilly Belle (Walt’s wife), Roger E. Broggie (Epcot imagineer), and Roy Disney, Walt’s older brother.