How to Spot Fake Disney Pins Online and in the Parks

Pin trading is one of our favorite past times at the parks. We love the hunt of looking for new pins, trading with cast members, and organizing our boards. Sadly, there are many fake Disney pins, or “scrappers” in the parks now a days. Today we’ll walk you through how to spot fake Disney pins!

But first, what is a fake Disney pin? It’s a pin that isn’t approved or made by Disney. Some pins don’t pass inspections and the factories or manufacturers release them anyway. Other pins are copied by factories overseas and sold online for low prices. Then, they are traded in the parks. Cast members can’t reject a fake pin, because guests might now know that it’s fake when they bought it. So, the park is filled with these pins with no solution in sight.

Buying pins online is the biggest culprit of introducing scrappers to the parks.  It can be tempting to purchase pins off of Amazon and Ebay because there are so many good deals. But, almost 100% of the time the big “pin lots” are scrappers.

The picture below is an example of a lot of scrappers.

The easiest way to spot a fake pin is if it is a soft enamel pin. 99.99% of the time these pins are fake. Unless you buy it in a Disney store and it comes with an official backing, it’s almost definitely a scrapper. Soft enamel pins are a cheaper way to produce pins.

The easiest way to spot them is to feel the pin. If it does not have a smooth finish, and you can feel the ridges, it’s likely soft enamel. It also looks like it has been filled in with paint rather than created smoothly. The picture below is a real Disney pin (left) and a fake pin (right). The differences are clear, but the easiest thing to spot is that the fake pin has more texture and looks like it was filled in in pieces.

Here is another soft enamel pin, this one is lower quality. You can see how bumpy it is, and how it is not a smooth finish. Any pin that looks like this is definitely a soft enamel pin.

This is a little bit harder to spot. Many fake Disney pins have mistakes with colors, or discoloration.

The pin below is a scrapper. Just from a picture, you can tell there’s a few things wrong. The first is there are missing colors. Her eyes should be filled in, but they are not. The second is the discoloration. Her hair should be more of a yellow, but it’s has a green tint. It’s possible this pin did not pass inspections for Disney, but was sold anyway by the manufacturer. It also could be a duplicate made using the same mold, but unauthorized by Disney and done in a cheaper manner.

Here’s another example.The pin on the right is real, the pin on the left is fake. First, notice that the left pin has big divets. Next, the colors are a telltale sign. It might be hard to tell which colors are genuine. A few things that stand out to us are the left pin, Hades mouth is filled in with green, not black, and the bottom right triangle is teal in one, and grey in the other. We recommend googling the pin (typically just type the pin description and you’ll see the results) and comparing your pin. It would be obvious that the left has too vivid colors and is fake! 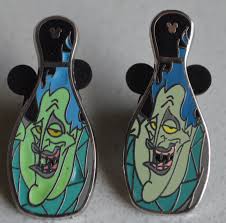 Here’s one more: two Duffy pins. This one doesn’t have any obvious imperfections, but the two different colors are striking.  The pin on the left with the pinkish tint is fake. The manufacturer did a great job to match the pin, but did not get the colors exactly right. Again, the easiest way to find which pin is real is by looking online! This is a great source.

Not all different colored pins are a sign they are fake. The pictures below are two identical pins, but one is more pink and one is more magenta. These pins were released in different years, one in Disneyland Paris and one in the USA. Pins sometimes vary year to year, or depending on location.

There are a lot of fake Hidden Mickey pins out there. Here’s one of the easiest signs to spot a fake from a real: the Mickey on the front. It should be well defined – with obvious edges between the ears and the head.

The picture below shows the differences between defined Hidden Mickey symbols, and blurred ones.

If you can’t get any signs from the front of a pin, flip to the other side and look at the back. First things first, read the pin. If there are any obvious mistakes, like typos or words that are connected, the pin is fake.

Next, take a look at the edges. Typically, but not always, the Mickey print on the back side of the pin should extend all the way to the edge. On the pin below, you can see there is a thin border on the outside of the pin. This is a hint that the pin is fake.

A lot of times fake pins will look or feel cheaply made. The image below shows two pins, one with a lot of glitter and a bright gold finish, and the other with almost no glitter and a dull finish. Some manufacturers make the pins inexpensively, which is clear when you compare a genuine one to a real one. (The right pin is the fake).

You can also sometimes feel that a pin is fake. Put your ear to the pin and lightly scratch it with your fingernail. If it sounds like sandpaper, there’s a chance that the pin is fake and doesn’t have the proper coating on it. Something to note is that pins that come in the mystery packs sometimes sound like this, probably because of how they are made in the factory. So, this isn’t a definite trick, but it still is a good test.

Is the pin below fake, or real?

It’s fake! Look at the Tramps eyes, as well as the border of the pin. It’s missing enamel, which means this pin either didn’t pass inspection, or was cheaply made.

Which of these 4 Jessica Rabbit pins are real?

The only real pin is the first one, where she has a pinkish tint. The second picture is an obvious fake, it is a soft enamel pin. The third picture doesn’t have the correct tint to her skin, and the gap between her hair and arm is filled in with orange. The fourth pin is also a fake. There is metal showing in the front that shouldn’t be there. Here’s a quick guide showing more details.

This pin is real. If you followed all of our tips and tricks, you wouldn’t find anything wrong with it!

Thanks for playing along, and we hope you found this article informative! If you have any questions about pins, drop them in the comments below. We’re pretty well-versed in the world of scrapper pins after trading for almost two decades!

If you’re looking for an easy way to store and trade pins, check out the pinfolio! We both have two and highly recommend them.